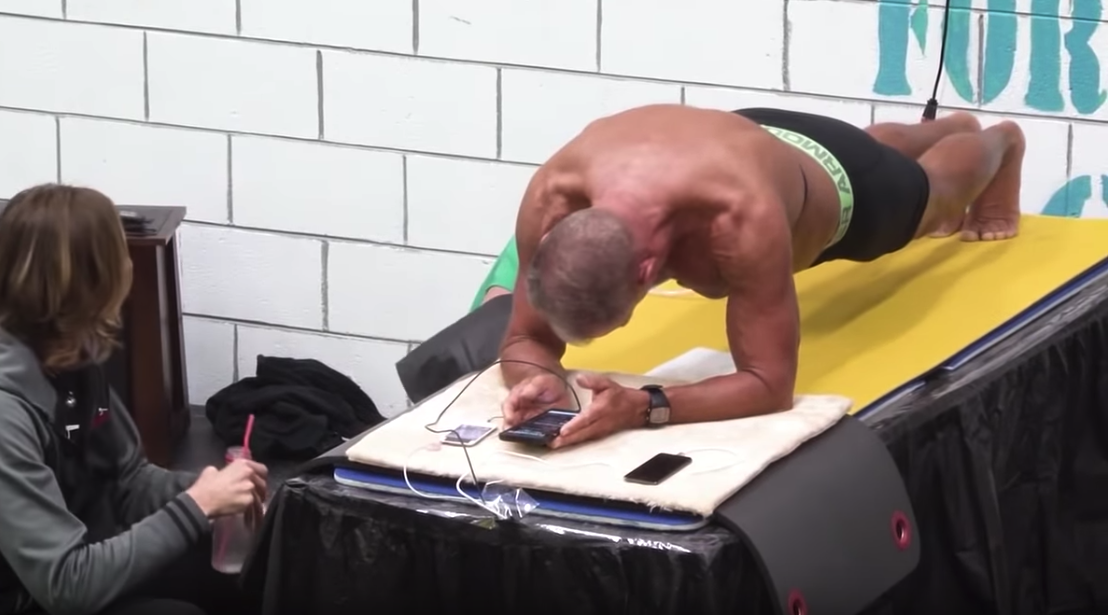 The abdominal plank is a staple in plenty of fitness regimens, but it’s safe to say most people aren’t exactly thrilled when a trainer calls for it during bootcamp class. Just a minute or two of planking will get the average gym goer’s core feeling like it’s on fire, so it’s impossible to imagine how former marine George Hood felt after planking for 8 hours, 15 minutes, and 15 seconds to set a new Guinness World Record.

It would be an impressive feat at any age, but the fact that Hood set the record for “longest time in the plank position (male)” at 62 years old makes it all the more incredible and proves that age is truly just a number when you prioritize training. And this isn’t the first time he’s done it, either. Hood held the longest plank record back in 2011 after holding the position for an hour and 20 minutes, but he lost it in 2016 in a head-to-head battle with China’s Mao Weidong, who managed to hold a plank for 8 hours and, 1 minute, and 1 second.

Hood, who has extensive military and law enforcement experience, set out to break the record to support a cause that’s close to him: destigmatizing mental illness and addressing it through fitness and professional help. He completed the record-breaking plank at 515 Fitness, a gym that does just that.

“When you’re in a combat situation, and even in law enforcement with the agents that I used to work with, we get involved in shootings,” Hood told CNN. “Some people don’t handle it well because they’re burdened with other issues that are running in the background, whether it be marital issues, kid issues or financial problems. Sometimes those things can push people over the edge and they don’t know how to flush it out, how to talk about it.

“But when they walk through the door at 515 Fitness, there’s hope because there’s licensed clinicians there and trainers that will help them get well,” Hood explained. His final time—8 hours, 15 minutes, and 15 seconds—was another way he paid tribute to the gym and its cause. He didn’t need to plank for more than 8 hours, 1 minute, and 1 second, but he opted to keep going to hit a number that included 515 in some way.

Leading up to his latest record, Hood trained for about 7 hours each day for 18 months, according to CNN. Guinness World Records reported that his training included a total of about 2,100 hours of planking.

With a training routine that rigorous, it’s no surprise that Hood is still breaking fitness world records at 62.

Now that he’s broken the plank record yet again, Hood says he’s retired—from planking, that is. His next goal is to break the Guinness World Record for most pushups in one hour, which is currently 2,806. If we had to guess, it’s not a matter of if he can, but when we will achieve it.

In An Effort To Make Fitness Accessible For All, IncludeHealth Found Its Niche –...

How to maintain your fitness and keep active as our air quality plummets –...

Meet the Powerlifter Who Can Lift Three Times Her Bodyweight