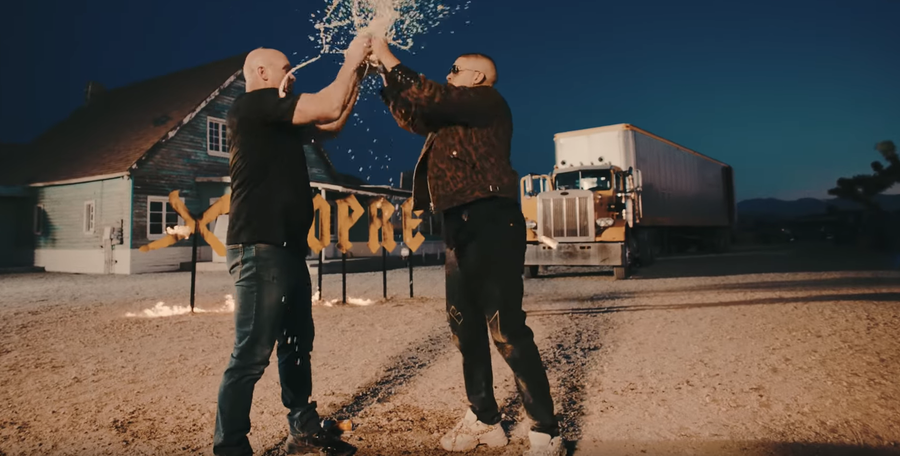 Stone Cold Steve Austin made a name for himself by opening a can of whoop ass on an entire ring of WWE wrestlers. Many classic Attitude Era moments involve him running to the squared circle and hitting a stone cold stunner on up to 10 of his fellow superstars in a short amount of time.

Although it’s been close to 20 years since Austin last cleared out a crowd of superstars, he clearly still has what it takes to hold his own against multiple opponents – only this time, it’s not in the WWE.

Austin was recently featured in Bad Bunny’s latest music video, “¿Quién Tú Eres? (Who Are You?)”. The Western-inspired video featured Bad Bunny, whose real name is Benito Antonio Martinez Ocasio, in a truck being chased by a biker gang. Eventually, the gang catches up with Bunny and begins to fight him.

The gang, though, don’t know that Bunny has a surprise in the back of the truck – Austin. “Nobody f**ks with my Bunny” Austin says before disposing of the bikers, even hitting a stunner on one of them.

Even if you’re not a fan of reggaeton, this video will surely have you saying “Hell Yeah” by the end of it. Skip to 3:50 if you’re just interested in watching Austin kick ass.

If hitting the stunner wasn’t classic enough, Austin and Bunny also smash some beers – Broken Skull for Austin and Corona for Bunny.

While we surely never knew we needed this crossover to happen, we’re damn happy that it did.

Ricky Gervais on Why Standup Is His Favorite Medium of Comedy

Shaping Your Own Surfboard: It’s Easier and Cheaper Than You Might Think

‘I’m a thrice-weekly runner, and these are the only shorts I’ll wear’

Ricky Gervais on Why Standup Is His Favorite Medium of Comedy

What online casino game can you play and win real money...